It is not a secret that permanent makeup became a beauty obsession of the decade. Natural beauty can be enhanced as well as many imperfections can be fixed with the invention of permanent makeup. Nowadays, there are so many different ways to apply permanent makeup that it can be confusing to choose the one which is perfect for you. In this article you will find all the information you need to know about microblading and how it is different from permanent makeup.

Is Microblading just a fancy word or is it really a new technique which is worth to choose over permanent makeup? Let`s find it out. To begin with, Microblading is an old fashioned method that originated in Asia, when sharpened bamboo and other instruments had been used to apply pigment into the skin. The beauty of it is  that hair-like strokes give a very realistic effect. In addition to that , microblading is less painful and less time – consuming procedure. 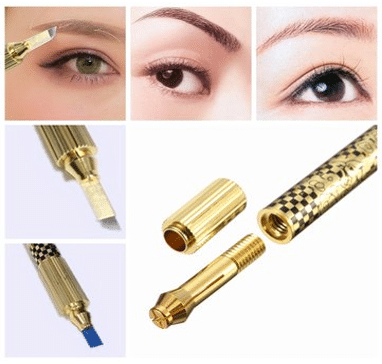 What is the difference between Microblading and Permanent makeup?

Microblading gives a more natural look because of the more precise tattooing technique  and the closer layer of the skin the pigment is injected. After the procedure, skin heals faster and leaves no colored shading (blue or green) if done in a proper way. Though, due to manual technique truly amazing results can be achieved, microblading is not suitable for all skin types. For example, for the oily skin it is more recommended to use Ombre technique performed with a machine, as the hair strokes will soon fade and lose it`s crisp look .

Is it a Tattoo?

With a raise of the popularity of the brow tattoo services the different names for it were established. Microblading, permanent makeup, eyebrow embroidery are just a few names for that procedure. It can be confusing to figure out if all of these procedures are considered to be tattooing or permanent coloring. The answer is YES. Microblading, like a permanent eyebrow coloring, is  just a different name for the same procedure called cosmetic tattooing. In fact, during microblading procedure pigment is implanted into the skin with the slightly difference,not as deep as machine method. Also,the method of implantation is more precise.

Is it Semi Permanent?

Although, it is a form of permanent make up, it is considered to be SEMI-PERMANENT.

Instead of the use of the machine this procedure requires a manual instrument which deposits pigment between epidermis and dermis layers of the skin which is closer to the surface than the machine pigment delivery method. Also, the amount of pigment inserted during microblading is smaller in compare to fully filled eyebrow tattoo. This treatment lasts up to 3 years, though a touch up is recommended every 12-18 months. Note: if after time you decide to change your eyebrows shape, it is much easier to do than to change a full eyebrow tattoo.

Eyebrow extensions are a hot new beauty trend, but are they worth the cost and time commitment?